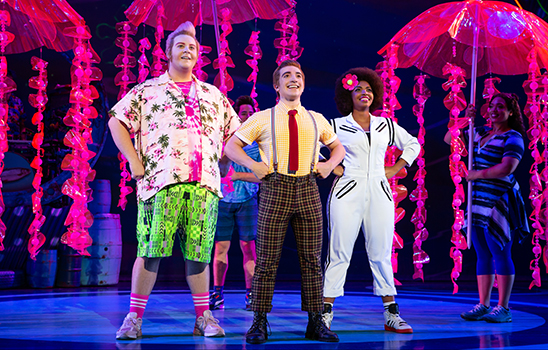 If you are a fan of SpongeBob Square Pants, grab the kids and don’t miss “The SpongeBob  Musical” at the Golden Gate Theater in San Francisco running through Sunday. It’s a very short run, so don’t take a lot of time to think about it.

When Broadway SF invited me to opening night, I wasn’t sure how they would pull this off. As my kids were growing up, we were all fans of the crazy fry cook sponge. But a live musical? I initially had my doubts.

Those doubts flew out the window the minute I walked into the theater. On stage were some people dressed in beach attire, playing various instruments, including kazoos, as people took their seats. This set the scene for the fun show that was to follow.

All the characters you know are there – Patrick Star, Squidward (who has an amazing costume with 4 legs!), Mr. Krabs and all the rest. The most fun characters? The Sardines! The music is fun and the story is well done – showing the importance of friendship, working together and to be tolerant.